Thousands of Afghani and Pakistani cameleers played an important role in shaping the Australian outback and were referred to as Afghan Cameleers.  Principally from Kandahar, Afghan cameleers arrived in Port Augusta and settled in many “Ghan towns” which became part of Australia’s foundation years.  One of the most  important was Farina Town in South Australia’s far north.

Cameleers opened the great central expanses of Australia. For more than 50 years until the 1920s, camel trains radiated into the outback from railways that gradually extended into the interior, or from points near otherwise isolated, inaccessible parts of the country. In long strings of up to 70, they sustained human life and new endeavours in the emerging outback communities. They carried building and railway materials, food, furniture, water, mail and medicine to the pastoralists and mining ventures, returning with the products of those inland enterprise.

Camel teams played an important role in developing Australia but their contribution has largely been forgotten. Cameleers played a key role in the construction of the Overland Telegraph and developing rail link between Port Augusta and Alice Springs which became known as the Afghan Express and later the Ghan.   The Ghan has emerged as a fitting legacy to the Afghan Pioneers and we hope our song brings to light a hidden history and the Afghan Cameleers, Australia’s forgotten pioneers. 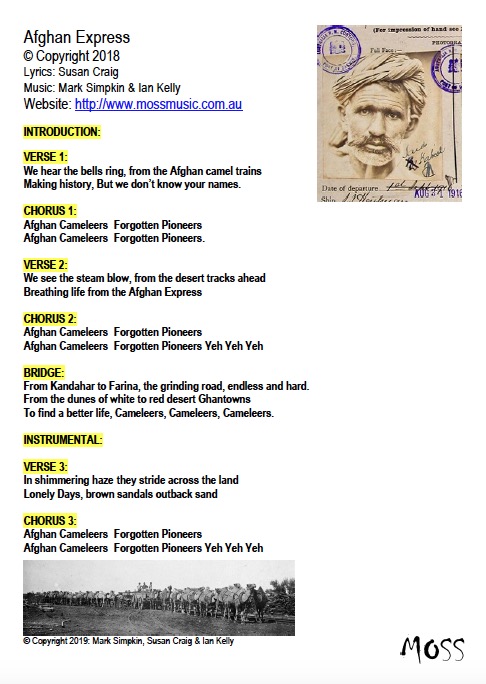