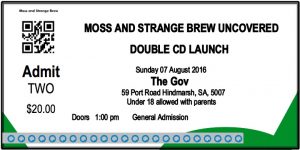 A double-whammy of great original rock music hits The Gov in August as Adelaide’s MOSS and Strange Brew combine forces for a their album launches.

Performing as part of the Umbrella and Guitars in Bars events, this is a show that brings Adelaide’s musicians to the fore – so get in quick and support two fantastic local acts.

MOSS performs original heartland rock music influenced by an era when songs were very much media commentary. The stage was the podium, the lyrics the speeches, as this was the only social platform for political and social voice.

This inspiration is clear on the band’s debut CD ‘Face the Music’, where their songs focus on storytelling and social messages.

“Moss writes and performs songs that have a little more to them than the steady diet of regurgitated emotional claptrap……” – John Schumann; Composer, Performer & Writer

Strange Brew was formed just over a year ago, by lead guitarist, singer and songwriter, Phil Bennett. Phil has joined forces with Liz Skinner (vocals), Mark Langford (guitar), Steve Amos (drums) and John Kings (bass) to bring together their respective experience in the rock arena. The band has produced two original albums, “Lonely Streets” and “It’s True” that ooze the laidback cool of surf-inspired retro blues.

Summer of '75
OUT NOW
GET YOURS NOW